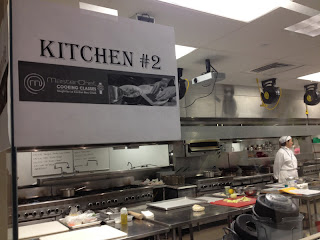 What does one birthday present and one mother's day equal? Two fabulous days at Le Cordon Bleu in Kendall Square for their MasterChef Cooking Classes! Their Saturday classes are three hours and they pack a lot into that time - almost too much. There were a few too many people in the classes in my opinion, making it difficult to get independent time with the chefs or with the ingredients (which you shared with a 'team'). Still though, the cooking classes were a lot of fun and I would recommend them to others! 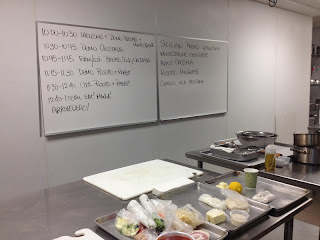 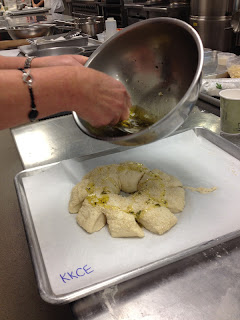 This class had two chefs and two classrooms full of people because it was so popular. They had pre-made the bread dough in advance, and just explained what they had done before we arrived - then we got to shape it and make the oil 'blessing' for it that it would be baked with and dipped in afterwards. I love fresh bread out of the oven so I wish we had gotten more direction on this one, but I also understand that you can only fit in so much with a 3 hour class, especially when you have a bread that must rise before shaping and baking. 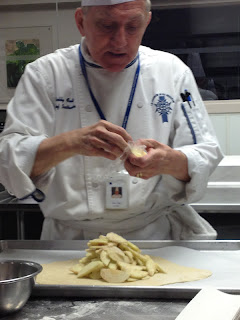 Having all of the ingredients pre-measured and chopped was such a treat! It made cooking everything so much quicker and less messy! For each of the recipes the chef did a demonstration at the front of the class first and then we were sent back to our stations to complete that part of the meal. I liked this apple dessert because it didn't use a pan, but rather just folded the dough up and over the apples. This would've been better with vanilla ice cream, but it was still delicious and not overly sweet! 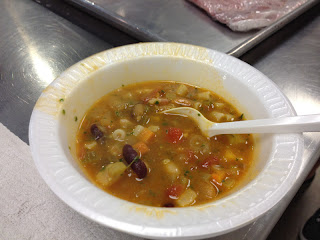 They also made fresh pesto, which is the key ingredient that makes Minestrone Soup "Genovese" compared to regular old minestrone soup. I learned that you never add uncooked pasta to soup, but rather always cook it in advance and store it separately, adding it to individual portions when you want to heat it up and eat. The pasta (ditalini in this recipe) will continue to absorb the broth in the soup, which makes it more difficult to season and the pasta will also get overcooked over time. 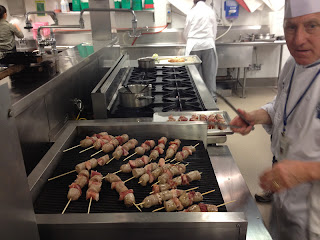 I'm not a big fan of rabbit - it's just got a bit too gamey of a flavor to me, and has seemed tough to me in the past. I was a good sport and tried it, but I would say I'm still not a fan. We wrapped ours in prosciutto and then skewered it with local sausage from Bianco's. We also used fresh rosemary to flavor the oil we brushed on the brochettes before putting them on the grill. 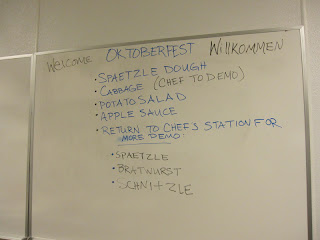 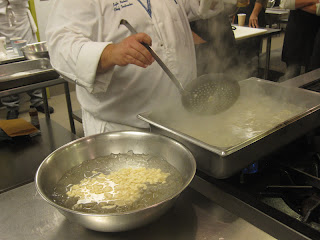 I was excited about this class because I don't know much about German food and I like learning about new things! I've tried making spaetzle before and it was a major failure, so it was good to see it made by a professional and get some tips. The key here was putting the cooked spaetzel into an ice bath right away to stop the cooking before adding it to a sauce later on. 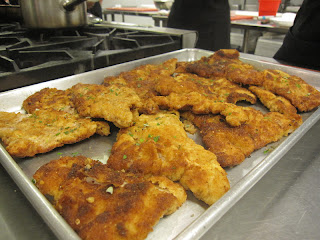 Apparently I've made 'spaetzle' before - but I've always called them cutlets instead. It's the same concept though, of dipping a protein in flour, an egg wash and then breadcrumbs, then cooking in a frying pan. The way we cooked ours in the class used WAY too much butter - that was pretty much the theme with everything we made actually! I typically make mine with turkey cutlets - we used veal in the class. 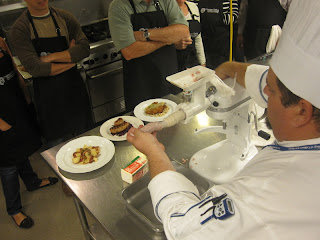 While they had already pre-made the bratwurst for us, they did do a demo of how to make it using the usual mixer attachment that many have at home. Seeing it made actually made me less interested in eating it - the concept of the casing for making sausage just ruins it for me and the use of fat in making the sausage also turns me off. It just makes you realize how bad sausage can be for you, particularly when not buying an all-natural or organic brand. 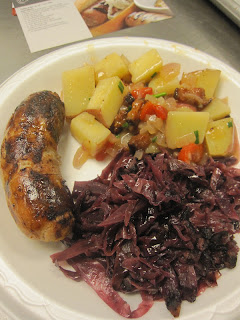 Overall, I think my favorite was the new take on potato salad and the braised cabbage, which was also made ahead and just demo-ed for us. I usually don't like potato salad because of the mayo in it, so this was a nice alternative with cider vinegar, roasted red peppers, bacon, and lots of other yummy ingredients! The cabbage was also amazing - such a great flavor and once I'd love to try and replicate myself! 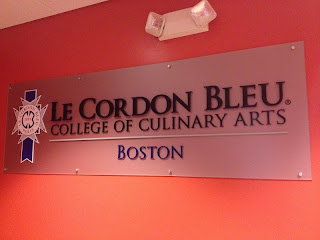 The nice thing about these classes was that in both cases there was so much food leftover we were allowed to take plates home of the food we had made. I didn't love the team approach to cooking in these classes - probably just because of my control-freak nature in the kitchen, but in both classes we did get to meet some cool people and it made the class more of a social experience.

It was also really interesting to see how the chefs of the class interacted with the volunteer LCB students helping out for the day. It definitely shows you the students are at the bottom of the food chain - they weren't even paid for their time helping us at the class, despite the high cost of the class. That bothered me a bit, but I suppose as students in the LCB program the experience is good for them. There was a lot of, "Yes, Chef" coming from the students when the head Chefs asked them to do things throughout the class - and the students did all of the cleaning after we cooked, which I have to admit was a nice treat!
Posted by The Academic Chef at 4:33 PM

Email ThisBlogThis!Share to TwitterShare to FacebookShare to Pinterest
Labels: Global