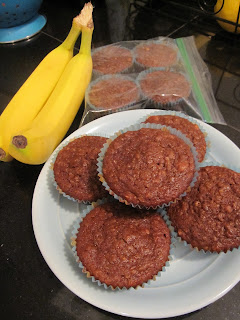 As I've said before - I hate wasting possible 'ingredients' so whenever I have ripe bananas I can't stand the thought of throwing them away even if I don't have anything specifically to bake for. With 2 ripe bananas sitting in my fruit basket, calling my name, I decide on making muffins - knowing how much I like the peanut butter and banana combo I thought it might be interesting to make banana muffins with peanut butter chips instead of chocolate chips. The oatmeal and wheat flour make me feel like I'm at least getting some fiber into these muffins, but they are by no means healthy given the entire stick of butter the recipe calls for. 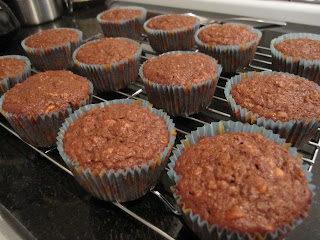 Read more »
Posted by The Academic Chef at 11:40 AM No comments:

Email ThisBlogThis!Share to TwitterShare to FacebookShare to Pinterest
Labels: Breakfast

This spinach dip is an easy go-to for a party appetizer - everyone always seems to love it and there aren't 5 million ingredients that you need to worry about. 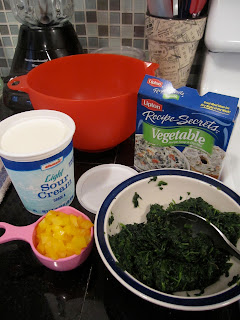 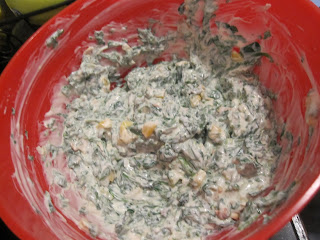 Mix everything together and refrigerate for a good hour before serving. Cut out and scoop out the center of a boule bread - use the bread you scooped out to dip into the dip, and spoon the dip into the bowl of the boule. You can also put out some baby carrots, celery or other vegetables to dip in!

*Don't be tempted to skip the step where you squeeze out the water from the spinach - there really is a ton of it in the box since it's frozen. After squeezing mine out I had a whole cup of green spinach water which is NOT an ingredient in this dip! 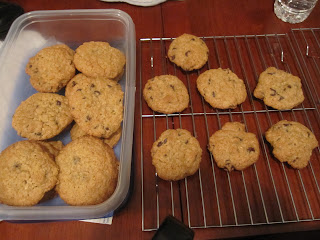 I was looking to just make plain old, traditional chocolate chip cookies and found this Neiman Marcus Chocolate Chip Cookie recipe - it called for ground oatmeal (so I put the oatmeal in a food processor until finely ground). It gave the cookies an oatmeal-y taste though - and was definitely a noticeable ingredient, but they still came out good.

Read more »
Posted by The Academic Chef at 10:04 PM No comments: 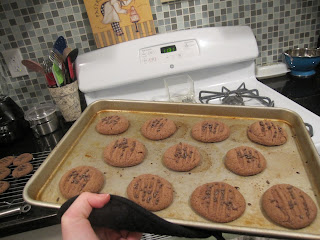 I came home to bake cookies tonight and realized I only had about 1/3 cup of white sugar left - and it was way too cold to go back outside to the grocery store. So I set out to find a recipe that would work with just brown sugar. Surprisingly I found quite a few and set to work. One of my favorites food blogs is Simply Recipes (link at the bottom left of my own blog) - and I really feel like her recipes are reliable and tasty. That's where I got the base for these, but as usual - I changed it up a little. Don't even try the batter - it might just be better than the cookies themselves.

Read more »
Posted by The Academic Chef at 11:53 PM No comments: 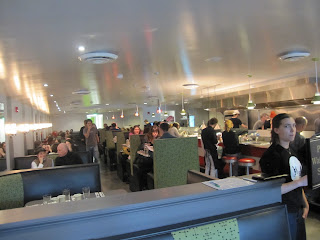 One of my fave lunch spots in Harvard Square is Veggie Planet - as you can guess by its name it is a vegetarian restaurant, with lots of vegan options/alternatives as well, and they've been open for over a decade. They have daily specials in addition to a great menu of dishes that can be put on top of pizza dough, coconut rice or brown rice, plus salads, soups and other entrees like mac and cheese and peanut udon noodle salad. I like their lunch special - 1/2 pizza with salad or soup, and my go-to is their "Henry's Lunch" - roasted butternut squash, caramelized onions, rosemary and sage, goat cheese and asiago on pizza crust. Vegetarians and meat eaters alike can find something tasty and very filling for lunch here. I've never ventured to try their brunch so when they decided to open a sit down, diner style version of their restaurant in Central Square I was quick to try it out. Veggie Galaxy is a diner style restaurant with many of the same great concepts as their smaller Veggie Planet, but with all kinds of new menu options as well to keep the two menus a bit different. 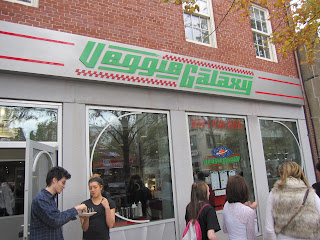 My friend and I ventured there during the Head of the Charles weekend thinking that since it was outside the main Harvard area - it would be less crowded. We were right! No line on a Sunday morning at 11:30am for brunch - I'll take it! It took us a really long time to read our way through the menu - and so many of the items sounded good. My usual indecision led me to a toss up between savory and sweet.

Read more »
Posted by The Academic Chef at 9:15 PM No comments: