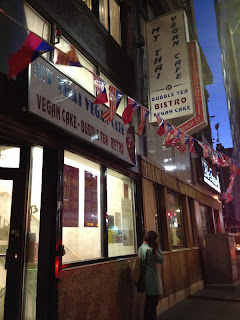 A few months ago a friend that lives in the area near this restaurant said that she ordered from here a lot - and after looking at the menu I could understand why! Their menu is sort of like Cheesecake Factory's - 10+ pages and a lot of variety. Just last week an old friend from a prior job and I met up for our occasional dinner out and agreed we had to try this place in Chinatown! I will admit there is certainly nothing on the outside that would draw you into this place, on the second floor of a rather rundown building on a side street in Chinatown. The food is definitely worth checking out though - it's vegetarian, but they have lots of vegan options as well. Actually, I'm not sure why it isn't called 'My Thai Vegetarian Cafe.' Plus, even better, you cannot beat the prices here! For two soups and two main dishes our bill came to $24! I should also point out that this was with my of my vegetarian friends, so the prospect of having an entire menu to pick from must have been amazing!
My Thai Vegan Cafe
3 Beach Street, Chinatown 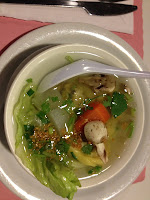 After dealing with how overwhelmed we were, given just how many dishes sounded amazing, we ultimately settled on sharing two main dishes and each of us tried their Wonton Soup to start. You'll find categories like: salads, soups, chef specialties, light entrees, thai fried rices, stir-fried noodles, tofu specials, thai curry specialities, vermicelli, and then categories around their different 'proteins' - veggie beef, veggie pork, veggie duck, veggie chicken, veggie seafood.

Wonton Soup - a mixed vegetable soup with chinese-style wontons filled with ground veggie-chicken, tofu, mushrooms and onions. I didn't love the wonton filling in these, but the soup broth itself was delicious and it was full of vegetables! 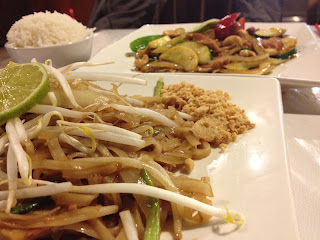 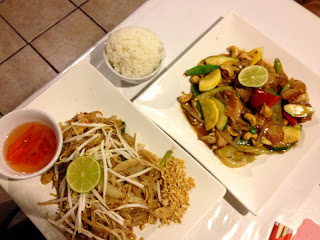 They don't seem to have their own website, but Boston Menupages does a good job giving you information about the restaurant.

I was a little nervous about all of these 'veggie' proteins but in the end I was pleasantly surprised with how much flavor all of the dishes had. If I hadn't known, I don't think I could have told you that it wasn't chicken given its similar texture and look, so be adventurous when you come here and don't just get the tofu and veggies dishes!
Posted by The Academic Chef at 11:00 PM