It's true. My old roommate and I found this great recipe online that we planned on cooking this week after work one night. We went to the grocery store, where I insisted that I had a box of quinoa at home, only to find that, in fact, I did not have quinoa at home. We wouldn't let it ruin our dinner though - and quickly decided that a good substitute for the quinoa would be a whole wheat couscous, which I did have on hand in my kitchen. So, here is the recipe for what was originally supposed to be "Toasted Quinoa Salad with Scallops and Snow Peas." Oh yeah - we changed the scallops to shrimp and added more veggies too, so basically it's a new recipe but thanks to the Eating Well website for the original inspiration! 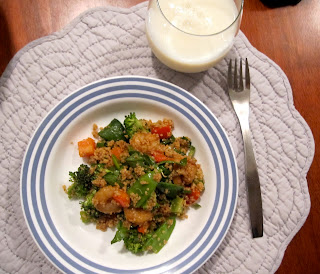 *I used a medium sized, already cooked shrimp (which = 9 shrimp per serving) which I defrosted and took the tails off. Feel free to use fresh and just add a bit more cooking time than we did during that step.


1. There's a lot of chopping in this recipe since all of the veggies need to be cut, so this is step 1 - mis en place, get everything ready. Cut your peppers, broccoli, snow peas, scallions, mince your ginger, measure out your liquids, etc. 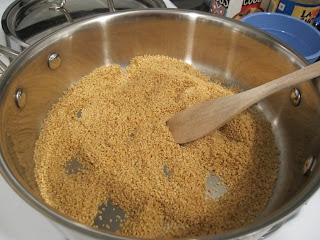 2. Toss the shrimp in a bowl with 3 tsp of the soy sauce and 2 tsp of orange juice.
3. In a large, deep skillet add 1 TB oil over medium heat (not too high) - add the couscous and stir constantly so that the couscous doesn't burn or even brown too quickly. You want to toast the couscous but not brown too much - it'll only take about 4 or 5 minutes. Next you can add the garlic and cook briefly, stirring into the couscous.
4. Add 2 cups water slowly and a dash of salt. Stir together, cover and cook over low heat for 5-7 minutes (or until the water is absorbed). Don't stir until the water is completely absorbed at the end - remove from the heat and let stand for a couple minutes covered. 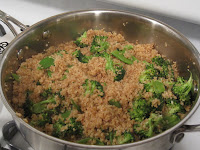 5. At this point you can stir in the snow peas, broccoli - then recover the pan to let the heat from the couscous steam the vegetables. Let stand for about 4 minutes more, then you can add the pepper and scallion. 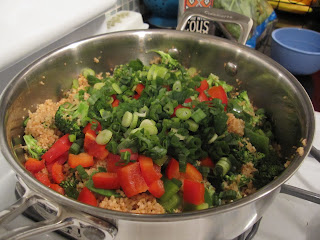 6. Meanwhile, in a larger mixing bowl whisk together 3 TB of the oil, 2 tsp of the soy sauce, the rice vinegar and sesame oil. You can add this mix right to the couscous and vegetables, stir together.
7. In a medium nonstick pan over medium high heat add the marinated shrimp, which, if you've bought the pre-cooked kind, will just need to warm up. Stir around and this process will be quick. Add the hot shrimp with some of its cooking liquids from the marinade to the large bowl from above and add the baby spinach to it - the heat from the shrimp will help the spinach to wilt a bit. 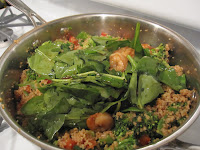 8. Add the spinach shrimp mixture directly to the couscous mix as well, stir together to combine everything and you're done! 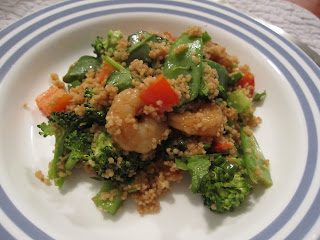 This dish was so fresh and healthy - but tasted great too! It could be served warm or cold - and leftovers were just as tasty. I think you could also easily make this a vegetarian dish by omitting the seafood option, or serve it as a side dish to a nice piece of grilled chicken or fish.
Posted by The Academic Chef at 10:55 PM